Welcome to May everyone. Summer is just around the corner. You haven’t heard from me other than an occasional note since January! I hadn’t noticed how long it had been! For better or worse, my life has taken on more tasks, responsibilities, and focus and I have dearly missed this communication with all of you.

It is my intention this year to transform my life, (and yours if you’re game) to a brilliant expression full of prosperity, ease and wellbeing. Let’s all upgrade.

First, laying some ground rules below.

I was going to write about post pandemic PTSD, but frankly, those of you who have been following me for years know what I’d recommend, i.e. take care of yourself, limit news, meditate, eat well, get good sleep, get outside, move etc.

What is going on is so much deeper than COVID. We are in a major transition to something new. So many authors, teachers, and spiritual leaders have written about moving through these upheavals, attempting to explain how the state of chaos in the world came to be, how it is affecting all of us, and what will happen next.

We have been going through a unique period in our lifetime. Information and events have been exploding into our lives faster than we can adapt to it. Not only the health issues with the pandemic, the political storms, lack of consensus on facts (knowledge commons), and the economic issues from lock downs, but also the effects from the stress caused by it all; more divorces, eating disorders, depression, drinking, and anxiety among them.

The media chooses stories to dwell on, magnify, exaggerate and cover day after day after day, until we feel like the whole world is in some sort of hell. Depending on what source of information you tune into the stories vary widely.

In a true democratic system, there is knowledge commons and there is a base line of consensus for what we are, as a nation, attempting to create, what democracy means, and how the government works. Our disagreements have normally been on what government can do to protect that and how.

We’ve entered, over the last decades, a period where we act like those who have different ideas to solve problems are ignorant, enemies, or just plain evil. Groups, organizations, colleges, media sources, and social media, censor opinions they don’t want to hear; we have lost the ability to hear opposing views.  We have fractured pieces of ‘reality’ wherein extreme conspiracy theories gain millions of followers. There is an abundance of mistrust in the ‘others’. Author Charles Eisenstein noted, “How can we have a democracy if we are being incited to hate each other by the very media we depend on to tell us what is real, what is “news” and what the world is?”  The political party in power tries to repress and censor the opposing party’s views.

Our cultural blemishes have risen to the forefront and are being seized upon by different sides. We live in a story that there are good guys and bad guys, and everyone thinks they are the good guy.

The likeliest explanation for the current state, upon the revelation of the destructive stories we’ve been hiding, covering up or ignoring, are hopefully, the last gasps of the most primitive of consciousness, as it raises its ugly head for all to see.

For example, there has always been a percentage of people who are drawn to law enforcement and military because of the sense of power and control it gives them over others. (There are ways to screen out these individuals in the application process with psych tests for social pathology.)

Yet we can’t fix what we aren’t aware of. Those of us in the spiritual community are painfully aware of all the world’s atrocities, from the horrors of war, famine, prisons, devastation of lands, all kinds of violence, to the insidious, subtle discriminations and everyday insults by all manner of journalists, bloggers and everyday people.

When I was young in the 60s and 70s, we were filled with energy and ideas for creating a new world: just, safe, environmentally healthy, with gender equality and healthier food. We saw women were treated unfairly and often as sex objects, minorities experienced deep discrimination from every level, senseless wars, and guns and violence exploded in the streets. We charged forward to change this.

We failed. There are more guns, still wars, more sexualization of young girls, still inequities, and we are less healthy.

We have to tell a new story. One not of good and evil, us versus them, but a culture of compassion, listening, patience, creative problem solving, and understanding. It is time for transformation. We know in our hearts that the way society has been isn’t working, and it’s making us sick. It’s making the Earth sick as well.

And not tell a story of what we’re against. The against position is already coming from behind, a weakened state that makes opposite forces strengthen more. Instead of pushing against opinions, beliefs or thoughts, manifest a powerful new vision that encompasses a beautiful story.

Seeing two young children fighting over a toy, rather than make one right and one wrong, an effective parent will work out a solution that reduces upsetting emotions, makes them feel understood, and invites them to help come up with a peaceful one. We are no different. If we are told we are wrong we dig in our heels, don’t we? We are more determined to prove we are right and they are wrong. What you push against grows stronger.

So, I challenge everyone to create a new story.

Ask the hard questions when they complain about the ‘other’. Ask why they think the other is that way, challenge them to go deeper.

In my book, The Light of Grace, two of the characters lived in future time periods: one in mid-21st century, and one in the 26th-century. It was great fun working out how many of today’s problems were solved. So, inadvertently, I’ve already begun this process!

One of the efforts of the spiritual community is to encourage people to go inward more, study scriptures and develop practices that raise one’s consciousness and the desired effect will be the raising of mass consciousness. As the teachings go, when it reaches critical mass, this will change our culture, change society for the better. And we can see the emerging effect. You can find results all around.

But I think we need to do more. I hope you’re with me. Thank you.

Photo by Obie Fernandez on Unsplash 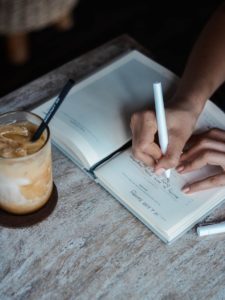 Gratitude blesses us in so many ways, reaching us physically, emotionally and spiritually. Sometimes it is a struggle to reach the gratitude that can be so healing. There is the importance of removing the angst, the anger, the fear and worry from our psyche. We have effective exercises for this. Not only bodily release, but also by writing them down and through ceremony, releasing them. This will clear the way for forgiveness: for ourselves and others. Forgiveness opens the heart. Then, with our open heart, we can all move into gratitude and seal our gratitude with a meditation.

Sit quietly for a moment and bring up in your mind a situation or another person who is creating a strong negative feeling. It could even be disappointment with yourself.

Label this feeling, what type of feeling is it? Anxiety, anger, sadness or some other disturbing feeling?

Close your eyes and scan your body to find a corresponding tightness or ache in your body. Whenever we have a strong negative feeling it will be reflected in a location of the body, maybe the stomach, chest, throat, gut, or head. Now allow yourself to focus on this sensation, and allow it to loosen. Our natural tendency to tighten it more, but we are holding it with an openness and allowing it to naturally be fully felt. Gradually it will loosen and dissipate. If it is really a tough one, do it again after your meditation.

You may want to write down a description of your feelings to later shred or burn in a ceremony by yourself or with your group. One year, we made a small coffin and shred those lists of things we wanted to release, ceremonially lining up in procession and placing those papers in the coffin before we burned them.

Forgiveness is an ongoing process. Oftentimes we work on it over and over and may feel like we aren’t making progress toward releasing this resentment or deep guilt, but if we continue, and continue to meditate, and even finding a good therapist if necessary, we wake up one day and it is forgiven. We feel clear on that particular issue. Here is a beautiful affirmation from Catherine Ponder that may help you move toward forgiveness. I’ve heard testaments to the effectiveness of her words. Say it aloud to yourself or together with your group, really allowing yourself to feel the words.

All that has offended me, I forgive.

Within and without, I forgive.

Myself and all others, I forgive.

Especially myself, I forgive.

I forgive everything and everybody who can possibly need forgiveness in my past and present.

I forgive positively everyone.

I release everyone, and everything that is no longer part of the Divine

plan of my life.

Now for the fun part. List at least 20 things in your life you are grateful for. Actually, it is an endless endeavor so just go for it. Think of all the parts of our lives that carry blessings: family, finance, work, friendships, health, conveniences, things that make life easier, sharing, compassion of others, knowledge, and on and on. Read through the list before the next step. Feel your heart swell with this abundance of life enhancing things. If you are in a group this is a nice time to each share some of the things on your list.

Sit quietly and let the other steps go, releasing any thoughts about them. This is a perfect time to do a few good breaths, inhaling to the count of 4 and exhaling to the count of 6 or more. Relax your shoulders. Begin your mantra or sit quietly and observe your breath. Thoughts will come and go. Instead of engaging in them gently move your attention back to your mantra or observing your breath. If you are new to meditation, see if you can sit for 10 or 15 minutes. Those who have been practicing go ahead and practice your normal routine.

When you are done, reread the Universal Forgiveness Treatment.

Photo by Ana Juma on Unsplash