We need imagination, a sense of magic, and belief in more than we can see.

In my twenties I read The Autobiography of a Yogi by Parmahansa Yogananda. In this autobiography he wrote about a woman living in South America, a homemaker, who exuded the scent of roses. Parmahansa searched for saints of all kinds, from all traditions, everywhere, and he decided to visit her after hearing her story. He, among many others, arrived at her humble home and sure enough, the beautiful fragrance of roses was present where ever this gentle woman went.

That story, among several that he wrote about, stuck with me, as I have always been drawn to evidence of the divine, stories of saints, and spiritual quests. That book was one of the pivotal books in my young life.

Fast forward to my forties, my husband and I were in his parent’s living room in the middle of winter in Indiana. It was such a nice change to me, a Florida girl, to be where snow blanketed the ground with snowflakes gently dancing through the crisp air. I had fallen in love with my in-laws as soon as I met them. I felt a special bond with my father-in-law, in part because he was such a loving and funny man, and in part because of his deep devotion to his faith. It is innate in human nature to search for meaning, and it often becomes a passion to seek God in whatever form we follow. His faith filled him with love and goodness, so of course I was attracted to that.

We were sitting in the family room, the parents in their lounge chairs, with my husband, Bill on one end of the couch and I on the other end, closest to the TV. I was gazing out the sliding glass doors at the snow when Pop got up and went to the cabinet full of old VHS tapes by the TV and pulled out a worn tape box that is literally falling apart from use. His hands had handled the cardboard so much the seams were splitting open.

Then he began telling us this tape was special—this one was about a woman in South America whose presence gave off the smell of roses where ever she went—and people came from all over the world to see her and see if it was true; to be near her and breathe in that heavenly scent.

The four of us watched with interest, especially me, as I was remembering the trip that the yogi had taken to see her too.

Near the end, I began to smell roses! The scent was so strong I searched the room to see if there was a bouquet of roses near us. But no, there were no roses. Then I told the others that I smelled roses! Tentatively, I asked if anyone else smelled them. I wondered if they would believe me. Pop jumped and up walked over to me and sat down. Then Mom did too. No one else could smell it. I, of course, was disappointed, and soon it was gone for me too. But it was one of those experiences that I made sure to note in my memory. It had meaning to me. But I wasn’t sure what the meaning was.

A few years later we got the call that Pop had passed away. We’d recently been on a trip up to Indiana to see him, knowing his time was near, so this wasn’t unexpected.

We made arrangements to fly up for the funeral later in the week. The next morning, as I was driving to my office to tie up some things before the trip, I reminisced about my father-in-law and how much I would miss him. As the tears formed in my eyes the air in the car changed. It felt warmer and softer and then the scent came. The scent of roses permeated the interior of my car! It was so strong I could barely catch my breath. I was stunned, and so filled with love at the same time. The tears just fell and I knew without a doubt it was Pop. How marvelous and magical! Pop knew that I would know immediately it was him, with his message of love.

My experience was bewildering and wonderous. Even in the normal every day, there are wonderous things happening around us. We need to stop and notice. Turn off the chatter in your mind, turn off your devices, feel deeply the presence of those around you. Be still. Life is full of wonder.

After I wrote this, on the same day, synchronistically, a friend gave me a rose. 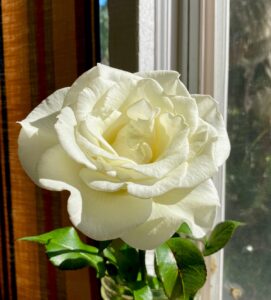